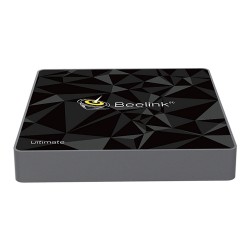 Beelink GT1 Ultimate comes with Amlogic S912 CPU which is a high performance octa core 64bit chipset which is known for a maximum clock speed of up to 1.5GHz. Apps will never run so smoothly in other chipset devices. People can easily enjoy many hot games and APKs with its 3GB DDR4 RAM and 32GB Flash ROM.

Configure 3GB memory and 32GB of storage space, with smooth and responsive navigation and apps that launch quickly.

With support for 2.4Ghz and 5.8Ghz band, it can transmit higher amounts of data, and its naturally less congested.

1000M LAN can improve the net speed and the performance to a large extent.

The latest in a line of broadcast and media resolutions, 4K is due to replace 1080p as the highest-resolution signal available for in-home movies and television. With a minimum resolution of 3,840 pixels wide and 2,160 pixels high, making it the equivalent to two 1080p screens in height and two in length.